By John Heard Nova Drag Radial, ORP Comments Off on Bash in the Backwoods Race Win

Ol’ Blue had a really good showing for her first time out in 2015, we won the Mickey Thompson “Bash in the Backwoods” Drag Radial class at Ozark Raceway Park June 6th, and we reset the class ET record as well! Sure can’t complain about that for the 1st few passes on the car this year.

During qualifying I thought we were going to have a season like last year, fight the car all through qualifying and qualifying poorly. Our 1st three passes were either slow or we knocked the tires off. Finally in Q4 we got it figured out and went A > B with a 4.96 – something to work with finally! After that pass, we improved about a tenth per pass and the car had it’s best MPH to date, 150 mph which is even better than last year in mineshaft air.

In the final we drew our good friend Tony Phillips who was running pretty darn well himself but we edged him out with a 4.78@150.2 to his 4.83@149.7 for the win! We couldn’t have done it without the great track prep the ORP crew was doing during the race. They really had it working pulling 400 on the torque meter and both Tony and I set new best 60’s at that track with 1.17’s and 1.18’s there. That’s a huge and welcome improvement on the track prep for ORP.

Having a good first outing was great, we learned a lot during the race and recorded a lot of data to make improvements in the car. All the new sensors worked great and certainly helped diagnose what the suspension and nitrous system was doing. Only damage we found was I broke the #8 roller rocker tip axle, and #6 roller died too, but didn’t break the axle. So, have some valve train issues to fix but other than that all went pretty darn good.  Chris and I can’t wait to get the car back out again, we’re shooting for 60’s this year and I think the car can get there.

Here’s a vid of the final –

The snow is getting ready to fly here in Kansas, so it’s time to tear down Ol’ Blue for... read more

Chris and I had a minimal number of changes to the car over the winter, so we were able... read more 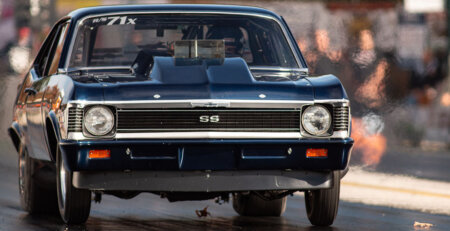