I promised a follow up on how well the new Line2Line Abradable Piston Coatings performed in my previous post about Abradable Piston Coatings, and I'm pleased to say it worked quite well. Here's a photo of the coating after the 2015 racing season, we put 43 passes on the pistons. My initial goal for the coating was to attempt to reduce piston rock by fitting the piston tighter in the bore. Best I can tell, we really didn't totally fix that problem.  I was able to confirm it as I put 2 new pistons in on the last rebuild and those still showed signs of piston rock. I think we're just going to have to work on the skirt length and/or shape both to improve on that issue, as the coating wore in (like it's supposed to) but was just not enough to tighten the piston up that much in the bore to prevent it from rocking. For those not familiar with my car, these Diamond pistons were used in a 582 ci Big Block Chevy Nitrous application that we run in Drag Radial/X275 type events. Line2Line has various hardnesses of their coatings available, I believe the one we used on these pistons was the softer of what they have. I believe on the next set we do I'll request the next step or two harder coating, perhaps that will work a little better.  You've gotta start somewhere on new ideas, and I'm very happy with how well the coating held up compared to past piston skirt coatings we've used. You can't really see it in the photo, but when the light is right you can see where the coating has wore down on the high spots, just like it's supposed to do. Others have asked about the break in process, I didn't do anything special. When I first fit the pistons to the bores as instructed by Line2Line, I was a bit worried as they fit very tight initially and make the engine tough to turn over. When you get the pistons back from them, they may be so tight they won't even fit in the bore. The process to fit them is to sand the skirts with like butcher paper or newspaper. Yes that sounds a bit sketchy, but it actually works just fine. All the pistons fit pretty tight in the bore when I was done.  I didn't lube them with anything but a light mist of WD-40 on final assembly. On startup, the engine might have cranked over a bit slower than before initially, but I think the piston coatings broke in pretty quickly once the engine fired up and got a little oil on the bores. After that it started like normal, in fact I think when spinning it over by hand it might have even turned over a little easier than before. Might be my imagination on that one though! We did not go through any special break in procedure, I fired the engine up several times in the shop and brought it up to around 120-130 degrees setting timing, etc. but didn't make any attempts to heat cycle things. We sprayed it the first time out and actually ran a new personal best in the car on the 5th pass, and won! It was a great start to the season last year.
By John HeardNovaAbradable Coatings, Line2Line Coatings, Piston Rock, Pistons, Powder CoatingComments Off
Read more... 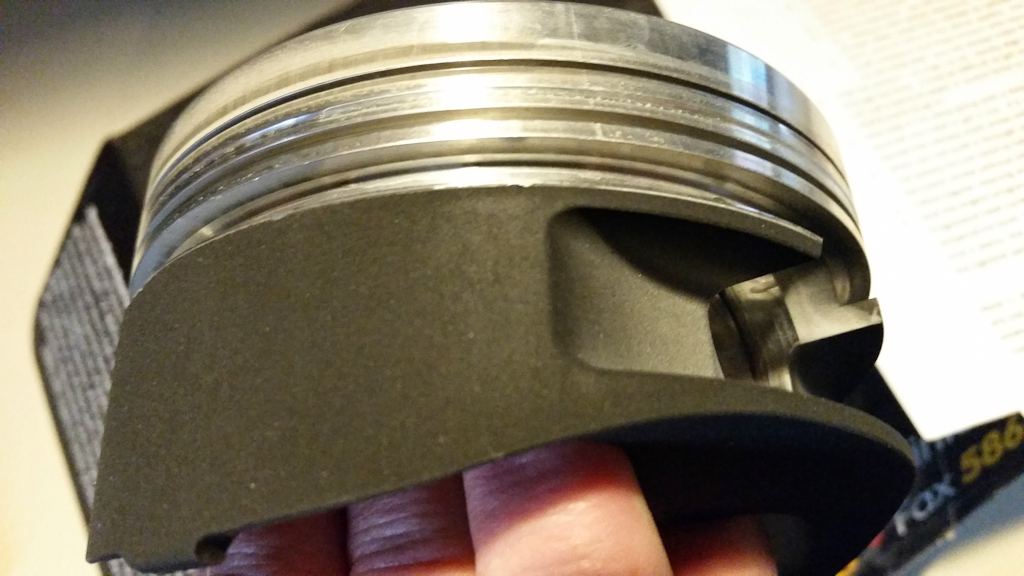 Last year during tear down when I was inspecting the pistons, I noticed a bit of piston rock had been going on. Not terrible, but just enough to scuff up the top of the piston near the top ring - more than I'd like. The piston skirts didn't get knocked in, no excessive cylinder clearance - just big piston and a short skirt I guess. After talking with Mike at Diamond, he recommended we try Line2Line Coatings - they offer a new Abradable Piston Coating that is applied to the skirts. Unlike regular piston skirt coatings, this is a thick coating designed to wear in during use helping reduce piston rock, reduce friction and maybe make a bit more power. There are some videos on their web site that help explain the process if you're interested. We'll take a look at these pistons after next tear down and see how they fared. 6 of the pistons are used, 2 are brand new so I can get an idea if the coating actually made much difference in piston rock after it has broken in. Read the follow up post after we tried the coating the first season.
By John HeardRacing EquipmentAbradable Coatings, Piston Rock, Pistons, Powder CoatingComments Off
Read more...