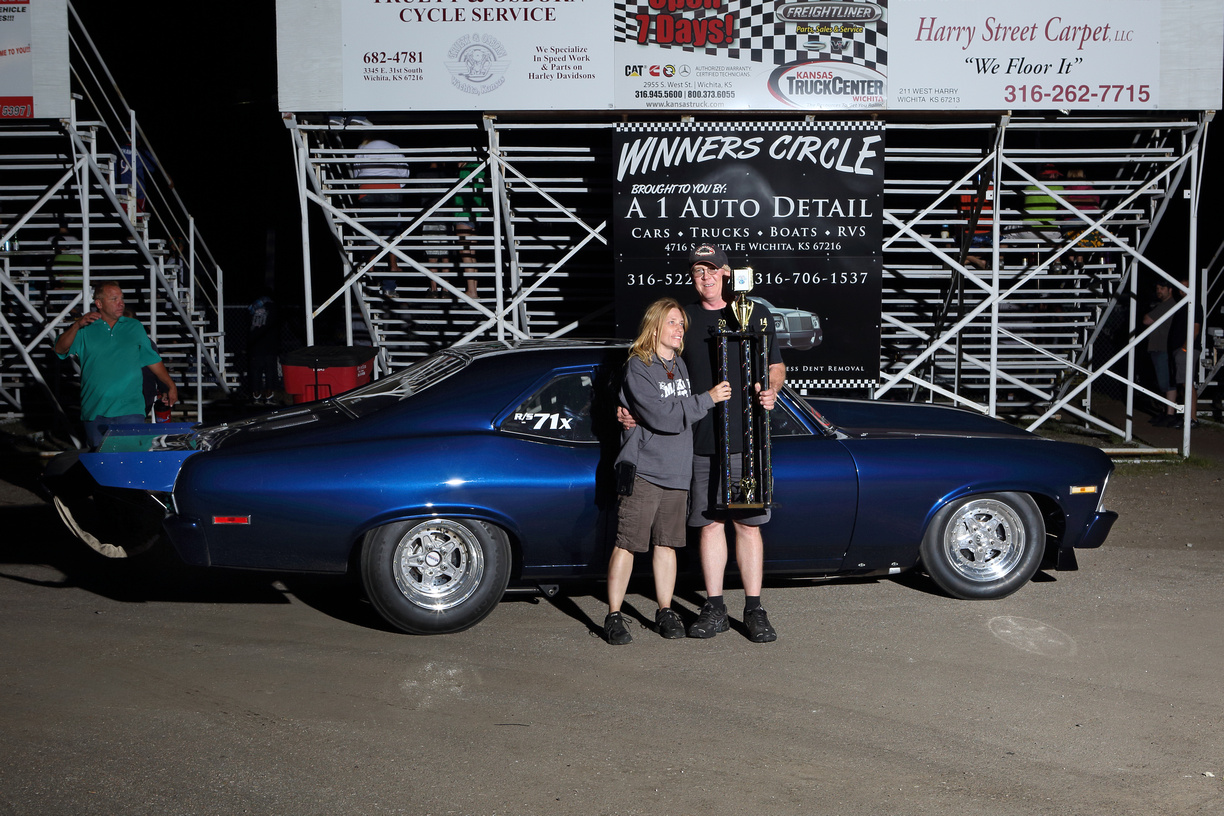 I've been a bit lazy about updating the blog this summer after getting the car running. Been crazy busy most of the time but now we're down with the transmission out of the car so thought I'd catch up a bit. This summer Chris and I scored our first win! I've been doing this quite a while and been to the finals many times, but something "always" happens and we runner up, but finally at Kansas International Dragway during the Summer Nationals we won in their Extreme Drag Radial Class! It was bitter sweet for sure! We also finally got the car into the 4's, actually at that race. One of the key things that had been causing issues, the nitrous controller which we had been fighting a delay in got replaced with a new NMS-1000, and that helped a ton. Later in the summer at the MAKO race at Tulsa we got more serious with the tune up and recorded a new personal best of 4.85@148 with a new best 60' of 1.175.  Fighting the urge to turn it up some more in eliminations, we got to the second round at that race - needed another tenth, guess I should have turned it up some more in retrospect. We raced Hot Summer Nights and the MAKO race at MoKan, both were a learning experience in dealing with hot tracks with the radials, but we did break into the 4's at MoKan with a couple 4.97's there at HSN5.  All summer long we had issues qualifying poorly, but getting things lined out by eliminations, mostly due to hot tracks. With the cooler weather this fall we're hoping to get the Nova down into the 4.70's if all goes well, I think it's certainly capable once we get things all tweaked just right. Hopefully we'll get the transmission back here soon and can get back to it!
By John HeardMiscComments Off
Read more... Finished up the license plate project today, this was one of those pain in the ass projects that I'm glad to be done with. It's not perfect, but good enough. I had the plate sandblasted to get rid of the old paint, which wasn't a great idea as it did cause some warpage from the heat - or shotpeening affect. Not bad enough to be a big deal, but I would recommend using paint stripper or something should you want to restore your own plate. We painted the plate with Krylon Semi-Gloss Black with several coats, then a couple coats of Krylon Clear, then Pumpkin Orange - it's not exactly the original 1971 shade of orange, but close enough. The plan was to sand through the orange exposing the black.  1000 grit sand paper takes a long time to get through a coat of that paint let me tell you! And, I also discovered the letters are far from flat, making it very easy to sand through the black down to bare metal in places. Which, of course require touch up work. Finally, after numerous touch up and resanding attempts we deceided close enough "Tack it!" and put a final coat of clear over it. The cuts in the middle of the plate are for the parachute and push bar mounts which pass through the plate as well as the Parachute Air Cylinder Tubing and Parachute Cable which go through the two upper bolt holes (drilled out). I'm pretty happy how it turned out, certainly a lot better than the original plate, but not looking to do another one of these again for a while!!
By John HeardMisc, NovaAntique Tag Restoration, License PlatesComments Off
Read more...
12Next